As promised yesterday, I will be posting everthing that I eat this week (M-F) along with the corresponding S/C Value (the "S" is the amount of sugar grams per meal/snack and the "C" is the number of carb servings.  Every 20 grams of carbs = 1 carb serving).

Here is what I ate yesterday (Monday):

If a meal/snack has under 5 grams of carbs total, you do not need to count it - you would count the carb value as 0!

Oops Snack:  Had two small pieces of homemade English Toffee.... trying to find a S/C Value but no luck.  Let's just assume it has put me waaaaay over my S/C values for the day (especially the sugars).

So without the toffee, I would have had a daily S/C total of 12/4.  But..... eating the toffee.... well let's just say I hated having to post about it and know that I will do much better today because not only do I want to succeed on this plan but because I DO NOT want to have to report an oops snack tomorrow!!!

I'll leave you with a photo of Jorge's Lemon Spiced Shrimp Salad that we had for dinner.  Again, it is straight from Jorge's Recipe Club.  I'll have a full review of the Recipe Club in the near future, but for now, if you are interested in receiving Jorge's weekly recipes (for meals, quick meals, snacks), along with a few other perks, follow the link above where you can get the details and see Jorge's short video describing the program. 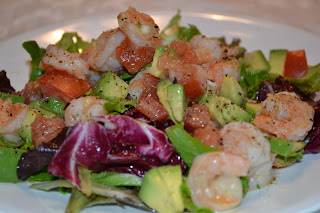