I survived!!!  Yep - We had 16 kids at my son's 12th birthday party and it went very well.  Five of the kids were my own, two were my niece and her boyfriend, and the remaining 9 were his friends.  You know how there always seems to be atleast 1 kid that you have to keep your eye on because they're a little more out of control than the rest?  Well, every single boy at the party was well behaved and polite. I was very impressed.  My parents, my in-laws, and my sister and her husband were here as well so we had lots of help.  It was 90 degrees and my son wanted a party with water balloons and nerf water guns so it was the perfect way for them to cool off.  Here are a few pictures: 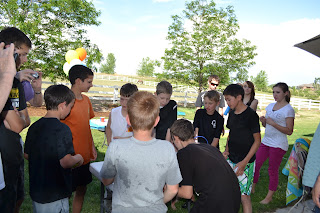 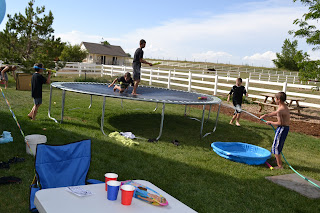 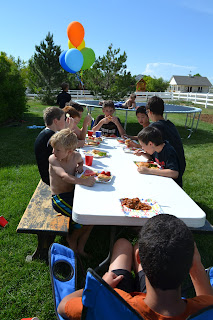 And here is what I ate yesterday:

Lunch: 1 Western Bagel Alternative English Muffin (Natures Hollow jelly and butter on one half and Bragg's Nutritional Yeast and butter on the other half), provolone cheese, smoked turkey breast, walnuts, celery with peanut butter 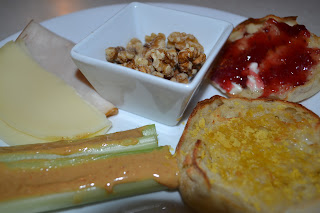 Dinner: Pulled pork, celery, cucumbers, 1 bite of birthday cake
My son wanted pulled pork sandwiches, bbq beans, and chips for his birthday.  I forgot to pull out some of the pork before the bbq sauce was added so I ate about 1/4 cup with some celery and cucumbers....... I was still full from my lunch anyways.  I had 1 very small bite of his birthday cake, and then later when everything was cleaned up I had some almond butter and redi-whip.

Have a great day and I'll be back tomorrow with my weekly weigh-in. :)